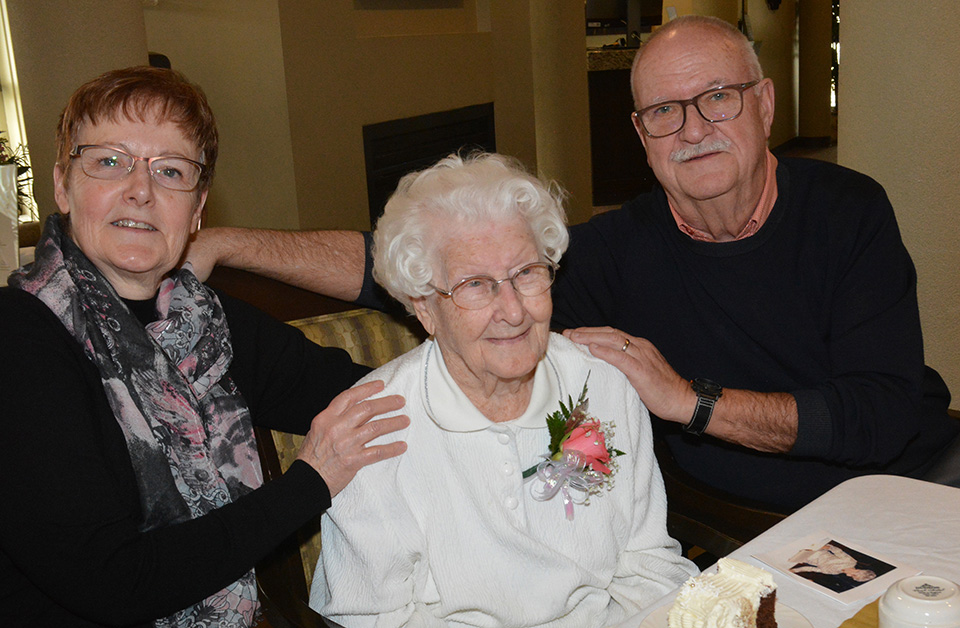 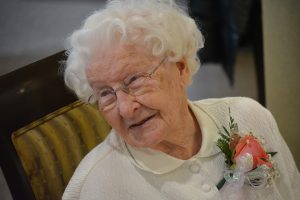 At 100, Marion Peckinpaugh loves conversation at Heritage House, where she celebrated her birthday on Feb. 27. (Photo by Lyonel Doherty)

Even at 100, Marion Peckinpaugh is a role model to her children.

The spry resident of Heritage House was given the first piece of cake for her birthday celebration on Feb. 27. And when the reporter asked her if she was going to eat the whole piece, she said, “Oh ya. Then added, “You can have it if you want (thinking the fellow was hungry).”

Marion said she was surprised and shocked to see so many people at her party.

But then her daughter, Lynn Schaefer, was quick to respond: “You like it a lot.”

“Oh, I do?” Marion challenged.

Of course, the reporter had to ask the proverbial question: What is the secret to your old age (wondering whether Marion would be offended by the term “old.” She wasn’t).

Was that (drinking) the secret? Everyone laughed.

The other fact that helped was her two children, Lynn and Cameron (Peckinpaugh), who didn’t stress her out too much.

Marion also golfed every day while living at Cherry Grove Estates in Oliver.

“Walking kept me healthy. Now, everyone rides around in cars.”

After graduating from high school, she worked at her father’s dental supply office. Not long after she met a tall, handsome fellow by the name of Doug Peckinpaugh, whom she married.

In the 1950s Doug invested in a high-end women’s fashion store, where Marion became the manager and sales associate.

Marion and Doug came to Oliver in 1977 and retired at Cherry Grove Estates. She became part of the Oliver United Church family and was a founding member of the church’s Sunshine Soup Kitchen, which is still active today.

Following Doug’s death in 2002, Marion sold her unit at Cherry Grove and moved into Park Place. She later moved to Heritage house.

“My memory is bad,” she lamented.

Marion noted she has no complaints at 100.

“I had a good life, with two great children.”

She recalled how Doug loved golfing more than she did. “That’s why I golfed; to keep up to him.”

Cameron said he was very proud his mother, noting she is doing well for someone who has lived for a century.

Was she strict as a mother? the reporter asked.

“She wasn’t that strict. She thinks she was but she wasn’t.”

Marion was pressed further about how strict she was.

“They knew what was right and what was wrong. I carried a strap over my knee,” she said.

Lynn quickly piped up by saying that wasn’t true. “It’s her sense of humour coming out.”

Marion continued by saying she made her kids behave at the table. “That was one thing that I was a little strict on; that’s all.”

What did the children do at the table that required discipline?

“They talked,” Marion said without laughing.

Cameron was asked if he saw his mother’s sense of humour while growing up.

Cameron recalled what he really liked about his mom was the fact she was very easy going.

Lynn said her mom was a great role model, who taught her how to act in public.

“She was a great supporter of everything Cam and I got involved in.” 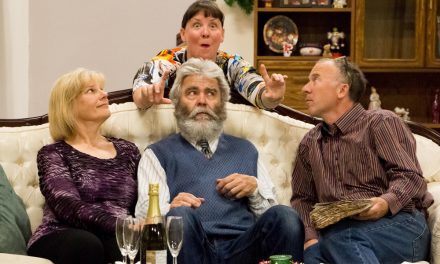 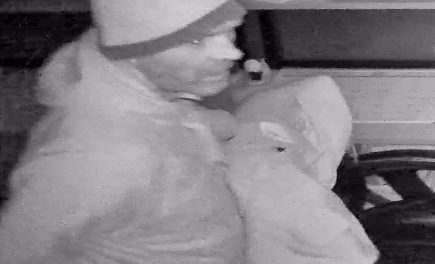 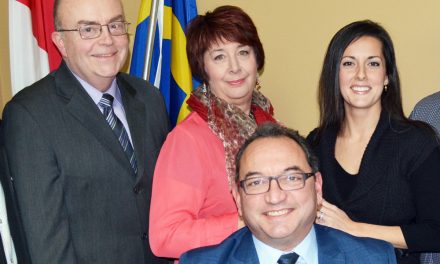