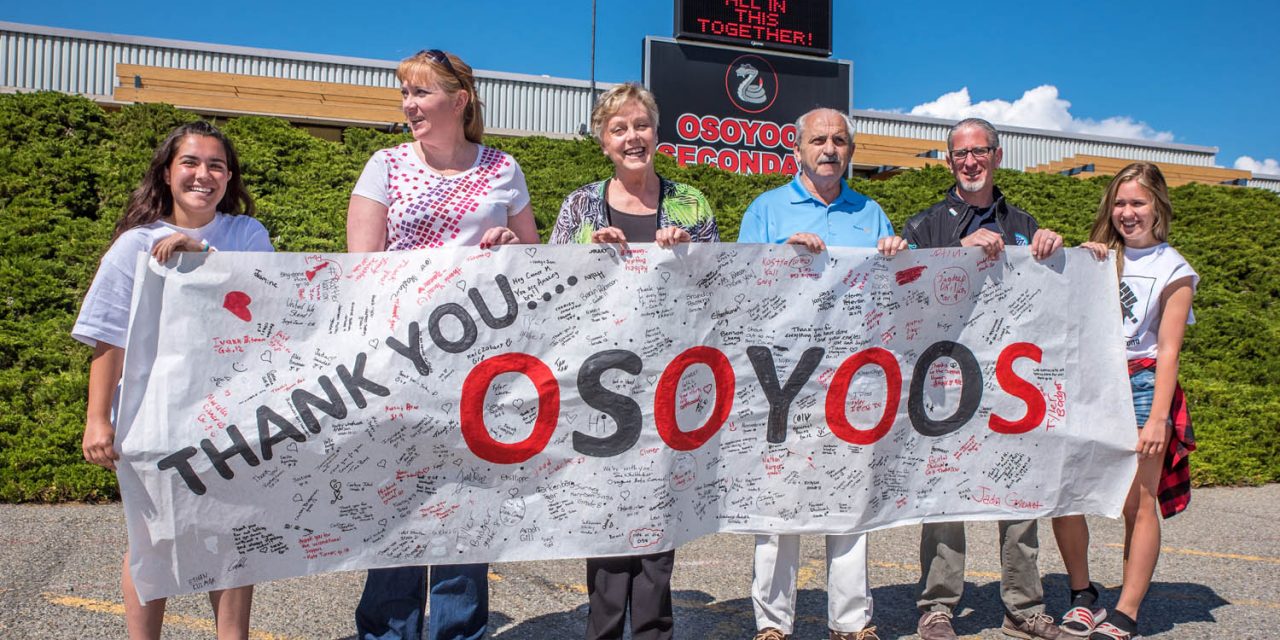 Students of the Osoyoos Secondary School senior girls soccer tean wanted a way to thank the Osoyoos community for its support during the difficult months their school was threatened, so they decided to do a thank you banner, signed by students and others. In May. they presented it to Osoyoos town council for it to be put on display at town hall. Students Natalia Ibanez (left) and Julianna Riznek (right) were organizers. From left are Ibanez; Brenda Dorosz, chair of Save Our Schools committee; Mayor Sue McKortoff; Coun. Jim King; Coun. Mike Campol; and Riznek. (Richard McGuire photo) 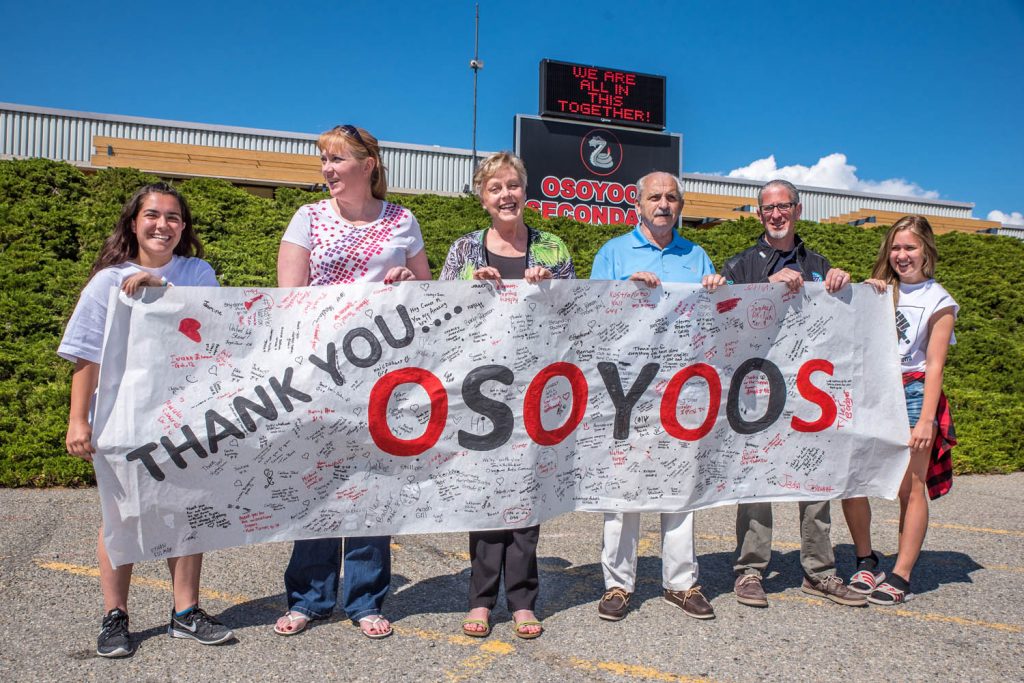 Students of the Osoyoos Secondary School senior girls soccer tean wanted a way to thank the Osoyoos community for its support during the difficult months their school was threatened, so they decided to do a thank you banner, signed by students and others. In May. they presented it to Osoyoos town council for it to be put on display at town hall. Students Natalia Ibanez (left) and Julianna Riznek (right) were organizers. From left are Ibanez; Brenda Dorosz, chair of Save Our Schools committee; Mayor Sue McKortoff; Coun. Jim King; Coun. Mike Campol; and Riznek. (Richard McGuire photo)

Trustees of School District 53 had already decided to close Osoyoos Secondary School (OSS) when they received an offer from the Town of Osoyoos in April of more than $1 million over three years to keep the school open.

School board chair Marieze Tarr acknowledged in May during another tense meeting between trustees and Osoyoos residents trying one last time to keep OSS open that this was the reason the school district didn’t discuss the offer with the town before rejecting it.

The admission came shortly after trustees voted 4-3 to approve third reading of a bylaw set to close OSS as of June 30.

The town announced it would be going to court to fight the school board’s decision, calling into question the process followed by the school district.

“The problem is we received the letter of financial promise last week, which was after the decision was already made to close the school.” Tarr said, when asked by a member of the audience why there was no discussion with the town of its offer.

“Now we’re being honest,” interjected Osoyoos councillor Mike Campol, as others, stunned by Tarr’s response, called out that the school board had planned to close OSS all along and the “consultation” process was a waste of time.

Tarr repeatedly banged her gavel at these interjections and announced she was adjourning the meeting.

Members of Osoyoos council were present at the meeting attended by more than 120 people in the hot and stuffy annex of the school district offices in Oliver.

Before the vote, they pleaded with the board to listen to the Osoyoos community, reverse the decision made April 6 when the bylaw received two readings, and instead grant a year’s delay to find a solution.

Coun. C.J. Rhodes spoke before the board voted, telling them he was going to forego the speaking notes he usually uses.

“I’m going to talk to you from my heart,” he said, as he spoke of how the Osoyoos community came together with as many as 20 to 25 per cent of the town showing up at public meetings. “I beg you, I implore you to change your mind. You are empowered to change your mind tonight and make the decision that is right, to not go down in history as making that pinnacle of bad decisions.”

Mayor Sue McKortoff told the board that the town’s offer of more than $1 million would have addressed the school district’s budget problem.

She pointed out that, contrary to the belief of trustees, it was not contingent on a referendum if the town delayed other projects and used funding that was already allocated in the budget.

“We are asking for a one-year delay on your decision allowing more time to consider district plans,” she said. “Residents need more time to make decisions about the future of their children’s education. Our community is engaged and prepared to work with you for the betterment of all.”

She noted that projected net savings to the district by closing OSS would be $387,300 based on SD 53’s projection of increased busing costs at $67,400.

“We are prepared to refute that figure as our transportation experts believe that the (busing) figure could easily be double that amount,” McKortoff said. “The savings to close OSS could possibly be $275,000, which is a small hurdle to overcome as compared to the social and economic damage that closing the school will cause to our community.”

If the board voted to close OSS, McKortoff warned the town would have no other option “but to initiate what we feel is the worst option” – going to court.

Despite the pleas from parents, PAC (Parent Advisory Council) representatives, council members, a retired superintendent of schools from West Vancouver, and NDP Education Critic Rob Fleming, the vote was a repeat of the ones on April 6.

The two Oliver trustees – Rob Zandee and Rachel Allenbrand – were joined by Debbie Marten of Cawston-Keremeos and Sam Hancheroff of Okanagan Falls in voting to close the school.

Those voting against were the two Osoyoos trustees, June Harrington and Tarr, as well as Cawston-Keremeos trustee Myrna Coates.

The Osoyoos Times posted her letter verbatim to its Facebook page without comment and the post was widely shared, generating more than 100 comments from angry readers.

“The Town of Osoyoos is known throughout North America as a retirement mecca and one of the best vacation places in the Okanagan,” Larson’s letter began.

She went on to write about the migration of seniors from the Lower Mainland.

“Seniors are a valuable resource for any community,” Larson wrote. “They bring ideas, skills and volunteer hours, which are a benefit to any community.”

Pointing to the emotional issue of the closure of OSS, Larson said: “I have faced criticism, along with the government, over funding levels for OSS, that it should operate regardless of the number of students enrolled.

“I have also been criticized for not attending public meetings on the issue,” she continued. “We elected good people to represent the best interests of all students in the district. It would have been inappropriate to use my MLA position in any capacity than to support the school board in its efforts to do its job, and the Town of Osoyoos and parents’ group(s) to engage and look for all possible solutions.”

Larson said she made every effort to remain in contact and support the community.

“The closure of OSS will not signal the demise of the community,” she wrote. “Osoyoos is a thriving community and will continue to be. I believe the students from Osoyoos will not suffer either emotionally or from an education standpoint by finishing their schooling in Oliver.”

Commenters lashed out against Larson.

“That got my blood pressure into the red zone,” wrote one woman on Facebook about the letter. “How patronizing can one get?”

“Linda Larson you no longer get my vote for anything!” wrote one senior woman. “When we most needed you, you let us down! Shame on you!”

“It was MLA Larson’s choice to take a back seat while the people of Osoyoos did everything possible to achieve a positive outcome,” Campol wrote. “If you are not willing to engage, be held accountable or participate in any way with a situation that impacts a community to this degree, you should take a back seat next year during the election.”

The Town of Osoyoos and four parents also asked the Supreme Court of B.C. to quash School District 53’s decision to close OSS.

They asked for injunctions to delay any closure for at least a year in a petition to the court filed in May.

The petition makes a number of arguments that the school district failed to follow its own school closure policy and failed to ensure an open and meaningful public consultation process.

In particular, it raises questions about a closed-door school board meeting on Dec. 9 where an unspecified decision was made concerning the closure of OSS.

The petition to the court argues that the board is required to adopt a school closure policy that provides for public consultation.

This consultation, it says, must include “fair consideration of the community’s input and an opportunity for the community to respond to a proposed school closure.”

“All of the speakers at each of the public meetings spoke against closure of Osoyoos Secondary, and the written submissions provided to the district were similarly uniformly against the closure,” the petition said. “The majority of the board members listened without reaction to, or interaction with, any of the public speakers.”

Heading into June it seemed a formality that Osoyoos Secondary School would be closing its doors for good, but that all changed in June when the Province announced funding to save the school. 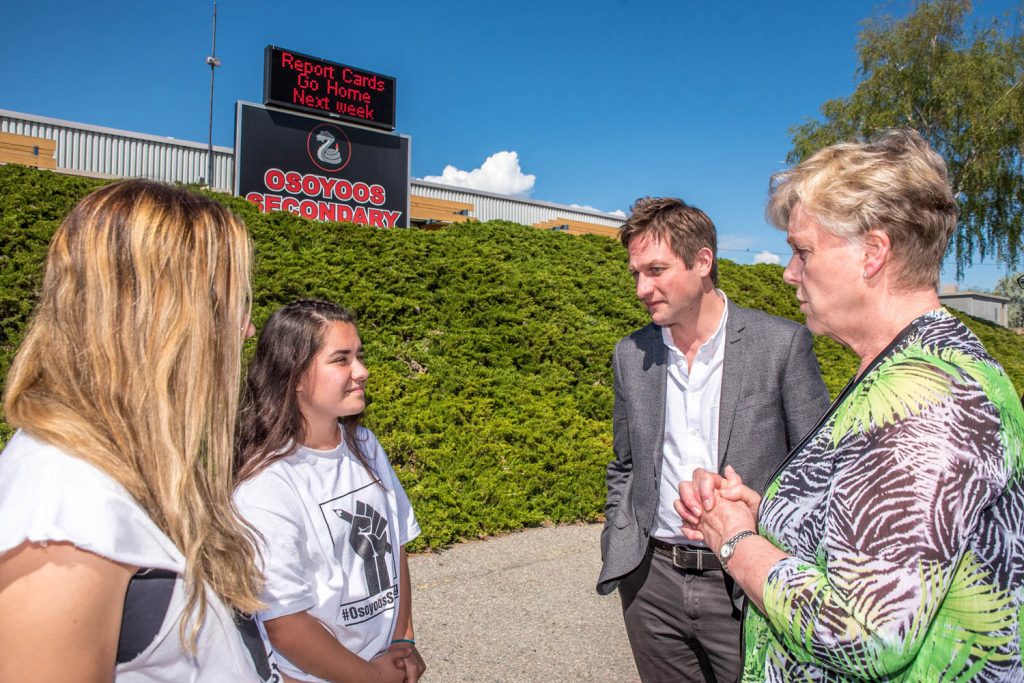 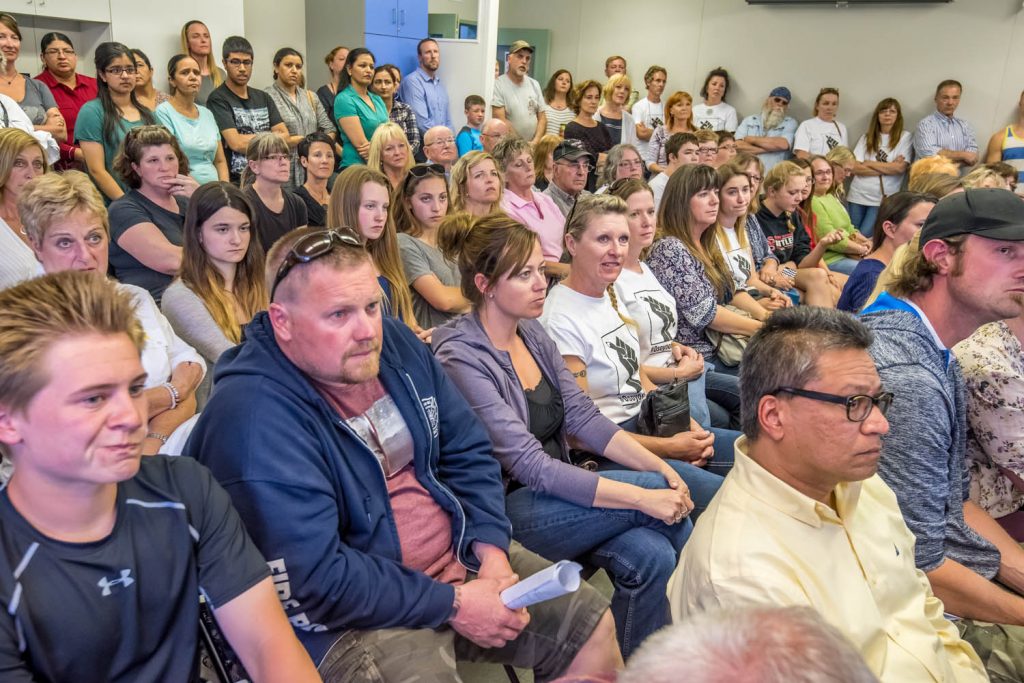 Osoyoos residents packed the School District 53 annex in May as the school board voted 4-3 on a bylaw to close Osoyoos Secondary School. The Town of Osoyoos announced at the meeting that they would be taking the matter to court. (Richard McGuire photo) 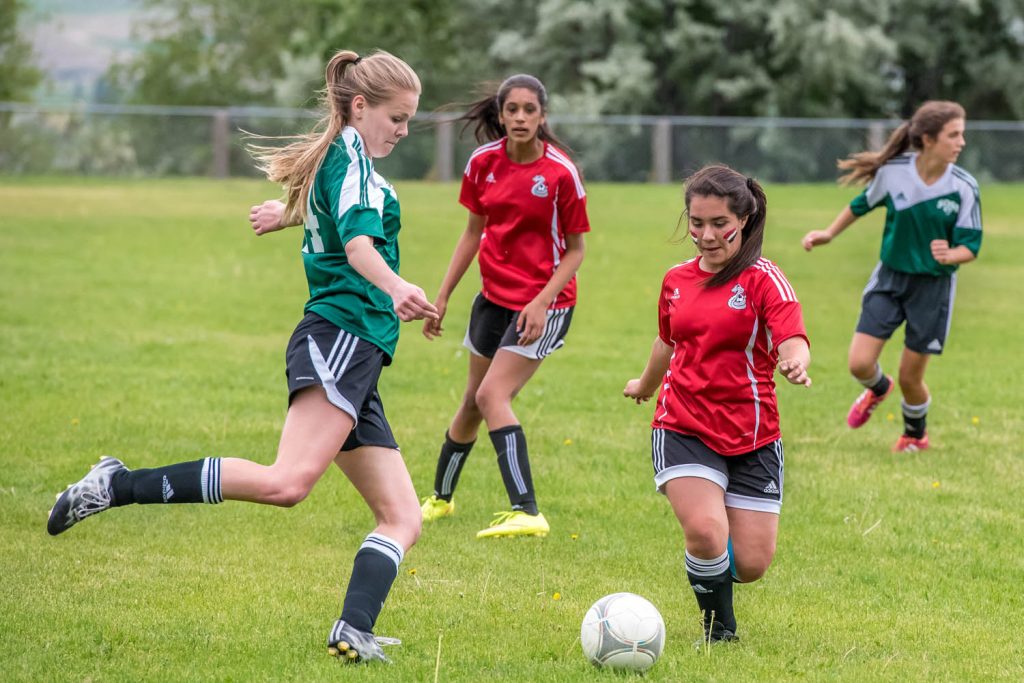 In their last home game of the season, and what was feared would be the last ever at Osoyoos Secondary School, the OSS senior girls soccer team shut out Oliver 4-0. Better that rivalries between the two communities should be played out on the sports field than on the school board. (Richard McGuire photo) 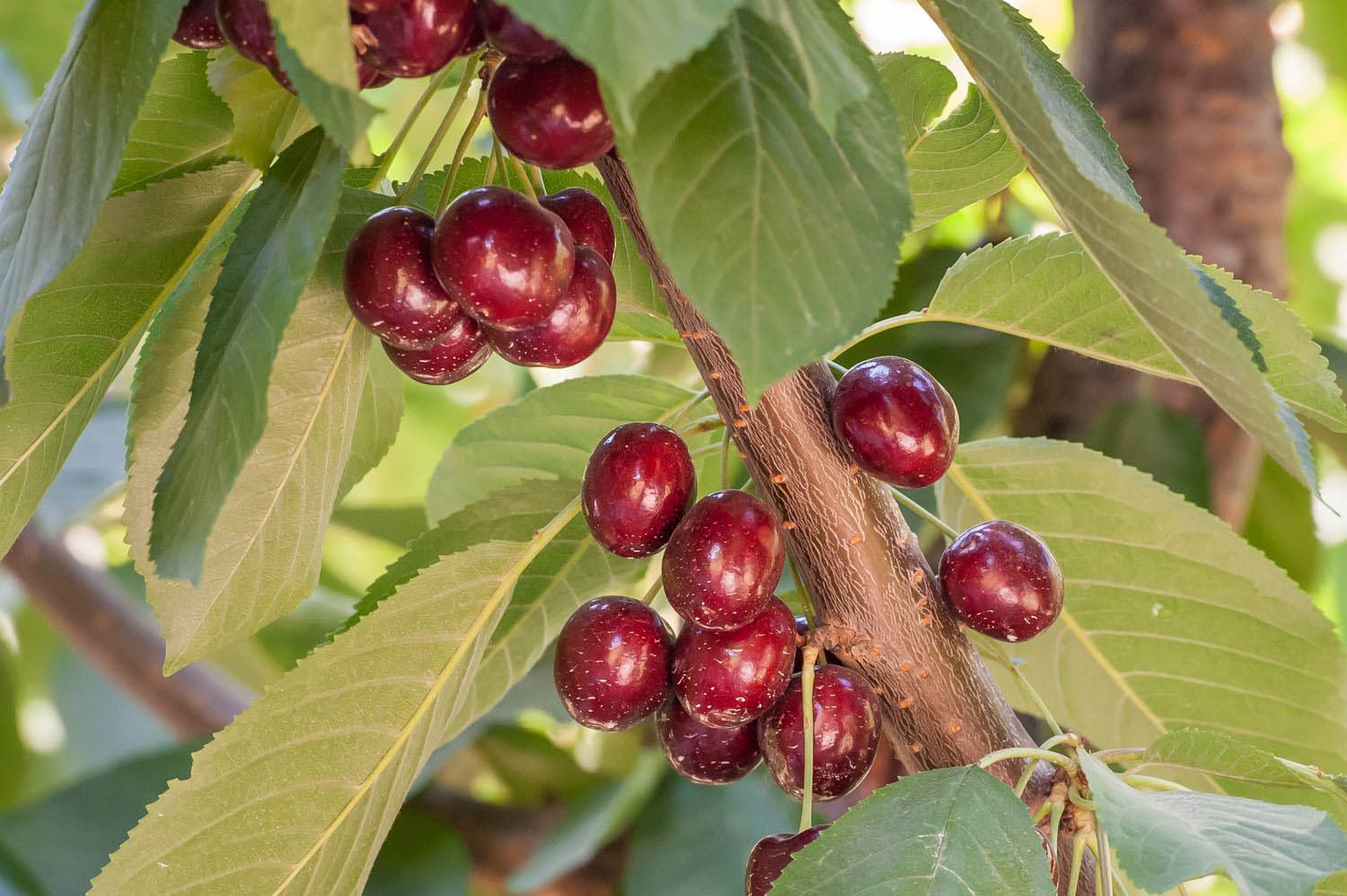 The first local cherries of the year were on sale in Osoyoos at Rai Produce in mid-May, weeks earlier than usual. From left are Sarabjit Rai (owner), Clara McKeachie (employee), Paramjit Rai (owner) and Aman Rai (son of Sarabjit. Sarabjit said this was the earliest he’d ever seen cherries in 20 years of business. They usually come around June 10 to 14. These ones were Chelans. (Richard McGuire photo) 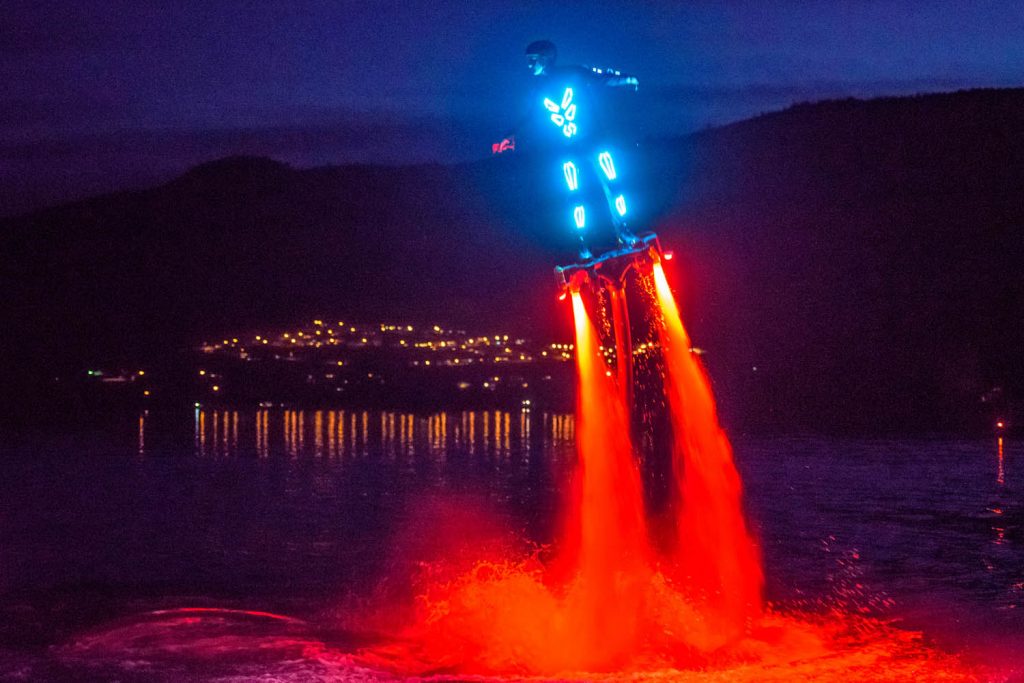 Curtis Pangrass flew and flipped through the air propelled by powerful jets of water in the sport of flyboarding. For this demonstration in May, he wore a suit with lights and the water jets were lit up with brilliant red lights. A member of Team Canfly, Pangrass, from Edmonton, did demonstrations at Walnut Beach Resort. The event was arranged by Travis Blacklin, proprietor of Canadian Jet Pack Adventures, who was operating a flyboarding concession at the resort again this summer. (Richard McGuire photo) 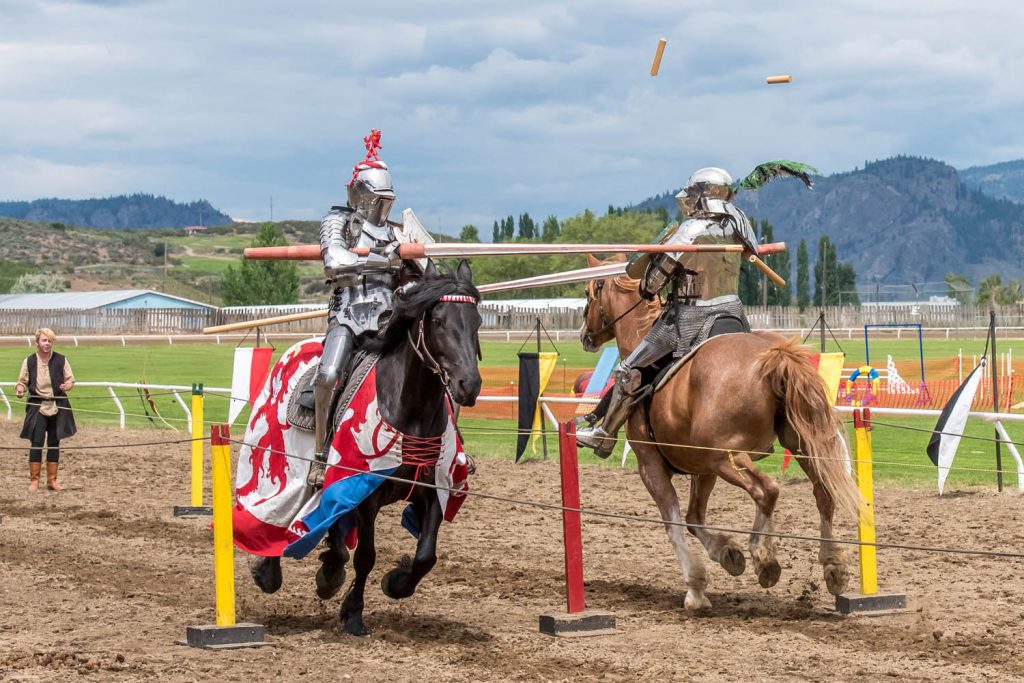 Stephane Tremblay (left) and Ripper Moore did battle with lances as they met and lance fragments flew through the air. On the May long weekend, the Society of Tilt and Lance Cavalry (STALC) from the Calgary area held a medieval jousting event at Desert Park. (Richard McGuire photo) 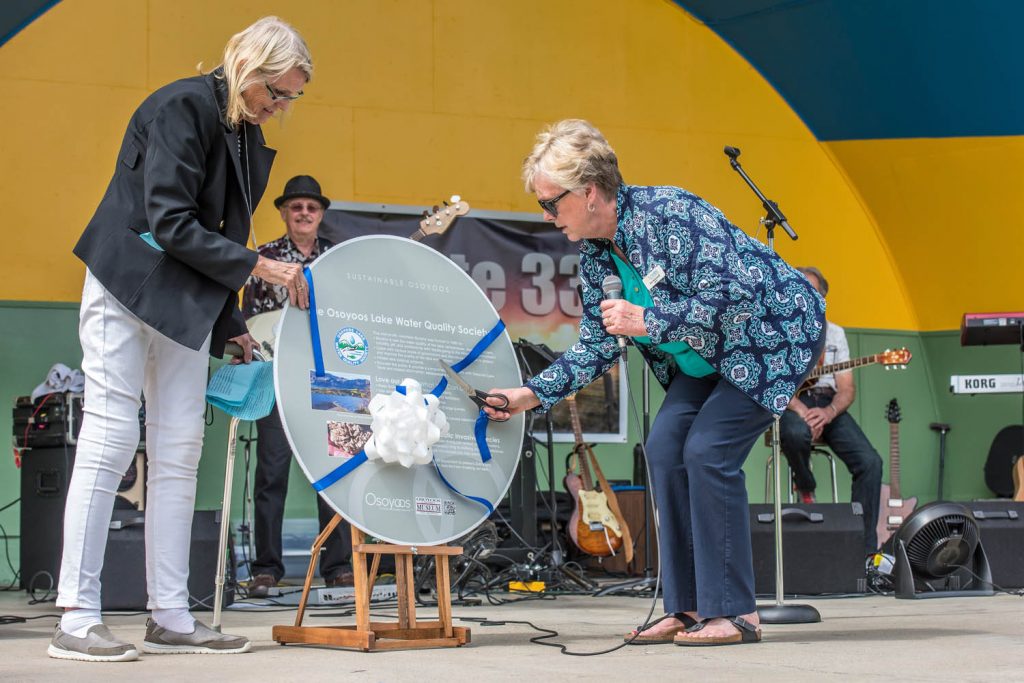 As Birgit Arnstein, president of the Osoyoos Lake Water Quality Society (OLWQS), steadied a new plaque, Mayor Sue McKortoff cut the ribbon. The plaque was a mock up of one to be installed by the walkway north of the museum. The plaque unveiling took place at Osoyoos Lake Appreciation Day, organized by OLWQS and held in May. (Richard McGuire photo) 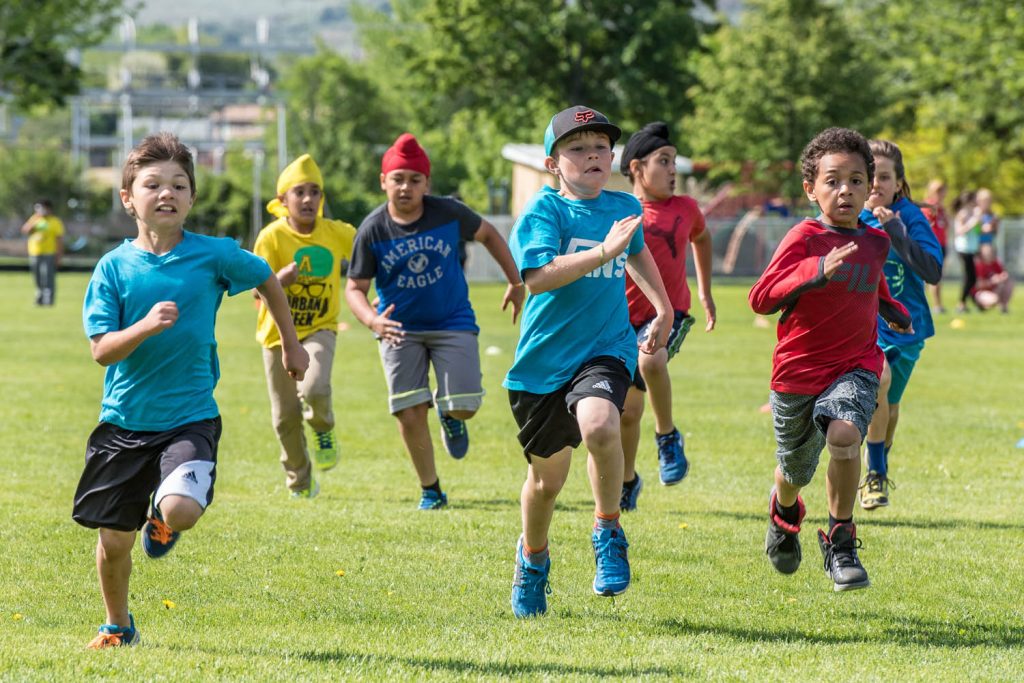 Callum Wallner, Alan Singer and Malcolm Cuthbert moved into the lead in the 80-metre dash at Osoyoos Elementary School’s track and field day in May. (Richard McGuire photo) 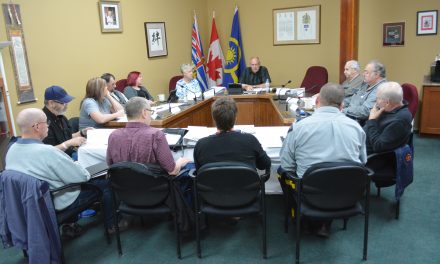 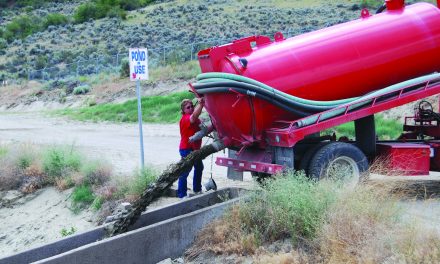 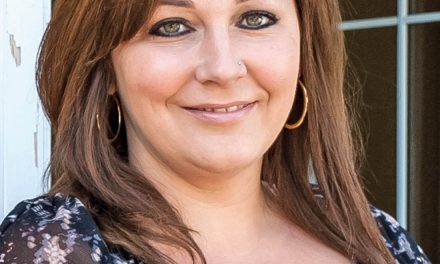 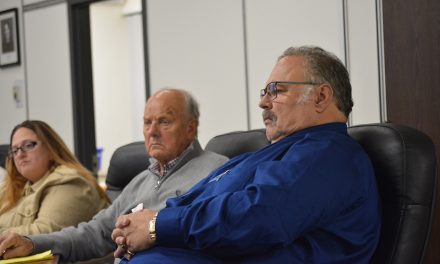