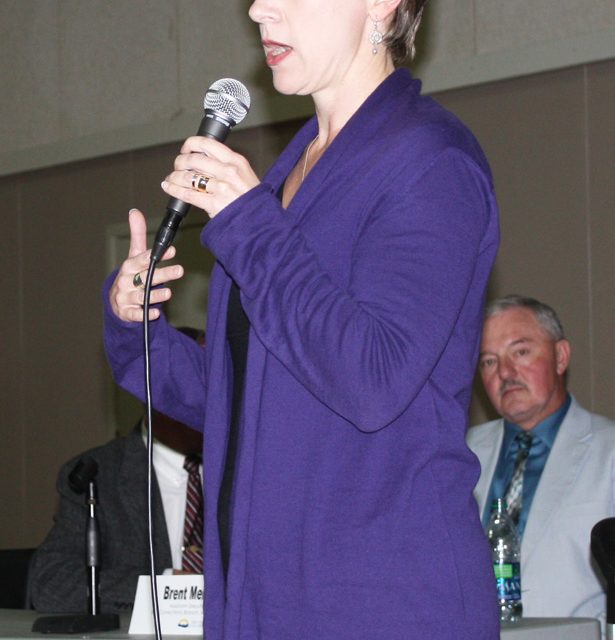 Marie Mayhew, director of programs and strategic planning, outlines plans and communication strategies for the Okanagan Correctional Centre during a public forum in Osoyoos on October 10. A similar meeting was held in Oliver on October 9. The 378-cell facility is slated to open in late 2016.
Keith Lacey photo

What will it really mean to bring a correctional centre to Oliver?

That’s what the nearly 200 residents who came to a special meeting at the Oliver Community Centre on October 9 intended to find out.

The meeting, which was hosted by the Town of Oliver, gave anyone with questions about the forthcoming Okanagan Correctional Centre, the opportunity to hear a 90-minute presentation by BC Corrections officials, and have their concerns directly addressed.

The presentation included a virtual tour of the 378-cell facility, followed by a question and answer session.

According to Merchant and his staff, the $200 million facility is still in its design and procurement stage, with government funding approval expected by February 2014. The three proponents currently preparing their bids for construction include BC Community Partners, Brookfield-Ellis Don-Fengate Justice Partners and Plenary Justice. Those bids will be evaluated in December, with a decision to be made soon after.

The final design, construction and maintenance of the correctional centre will be covered by a private/public partnership agreement.

Merchant told the audience the goal is to break ground by the spring of 2014. The design and construction phase would continue until September 2016.  Staff training and set-up is scheduled from September to December 2016. BC Corrections has the facility slated to open in late 2016.

In terms of job opportunities, Merchant said there will be 500 direct and 500 indirect jobs created during construction, and 245 correctional staff will be hired.

However, 55 to 60 per cent of those employees will come from other centres, including a warden, with the remainder coming from the local area.

There are also two large contracts for healthcare and food services available to bid on.

BC Corrections has also partnered with the South Okanagan Chamber of Commerce to provide a business registry to capture interest from local contractors, service providers and job seekers. People interested are advised to register at www.sochamber.ca.

At two prisoners per cell, the facility will have the capacity to hold roughly 750 inmates.

The facility will be built to maximum-security standards, as is common practice, but Merchant emphasized that it will be a provincial correctional facility, not a penitentiary, which appeared to be an ongoing common misconception within several communities, he noted. Among the key differences between the two, Merchant noted, is the length of sentence.

Adults are sentenced to provincial jails when they receive sentences of less than two years or may be serving time while awaiting trial, while federal prisons or penitentiaries are for those serving longer sentences for crimes that they have already been tried and convicted for.

Merchant said one of the main reasons the new facility is being built is to ease pressure at the Kamloops Regional Correctional Centre.

Merchant said one of their goals over the next few years will be to have communities understand exactly what they do and continue to clear up any misconceptions or concerns the public may have.

Those concerns voiced during the October 9 meeting ranged from job opportunities, to the visibility of the 36-acre facility from Highway 97, to the effect that being labeled a “prison town” could have on tourism.

“We all want the economic benefits that a massive structure like this will bring but it seems inappropriate and unprecedented to construct BC’s largest maximum security prison on the outskirts of the Wine Capital of Canada,” said business owner Midge Wyse.

“What I want to know is why wasn’t there any kind of public consultation or referendum. Why didn’t anyone ask us?”

Wyse is one of a number of long-time residents to share that concern but one audience member pointed out the decision to enter a bid to have the facility near Oliver was not a decision made by Town council.

“The facility is being built on land that is owned by the Osoyoos Indian Band. It doesn’t belong to the Town,” explained the audience member.

Mayor Ron Hovanes, who helped field questions after Merchant’s 90-minute presentation, jumped in to speak on behalf of council.

“I’m not backing away from this question,” Hovanes told the crowd.

“The decision was supported wholly by the Town council and rural director of the day but I can say with confidence that the present council continues to support the decision to have this facility built,” said Hovanes.

“Never has the South Okanagan been the recipient of 245 well-paying jobs with one project. The neighbouring communities that said no to the bid opportunity are now openly hoping that the economic benefit will support their areas as well,” the mayor added.

“You can read study after study to support reasons why a correctional facility is not something you want near your town,” said Merchant. “But no matter what industry you’re in, 245 jobs can’t be a bad thing for a community. It just can’t.”

Wyse said she was also concerned about inmates getting preferential medical or psychiatric treatment when taken to the clinic or hospital. Other audience members expressed concern after learning that 56 per cent of BC’s provincial prison population has been diagnosed with mental health and/or drug-abuse issues. One woman said she found that number startling and said she wondered if a prison was the place for the best treatment, while another resident noted the population of inmates that were First Nations.

“Sure, when people finish serving their time they are given a bus ticket to go home, wherever that is,” she said.

“But if I were in their shoes I wouldn’t go home. I would go see (Chief) Clarence Louie and see if he would give me a job,” she said.

“It’s different than what people expect, and I wish I could convey that to the public in general,” Merchant told the audience.

“We are not a drain on the medical side, or any other side  of the equation. No one will get preferential treatment. In fact, in most cases people housed within the facility will receive treatment within the facility. Should they need to see a specialist or go to the hospital they will wait like everyone else. What’s important to remember first and foremost is that not all people in our centres are mass murderers.  They are welders and carpenters and anything else you can imagine. But most importantly, they are British Columbians with the same needs as any others. They still have some rights.”

Cathy Few’s husband and son are both currently employed by the correctional facility in Prince George. She said it’s a great place to work and she hopes both will be able to get transferred to the Okanagan facility so she can be closer to them.

“A lot of the times, not all the times, but often enough, these are just people who have made a mistake. It’s easy to say ‘not in my backyard’ but look at it this way. If it were your son or brother or father or mother or sister even, would you think differently about these people? I urge anyone in this room to stand up if you’ve never made a mistake or don’t have a past.” 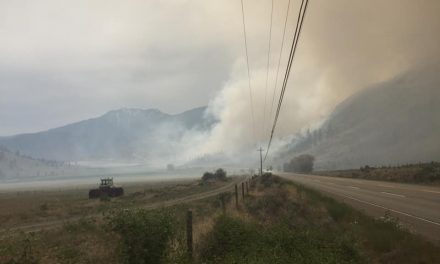 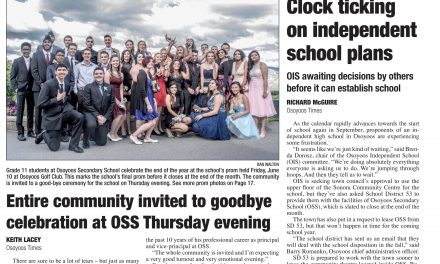 Wine Talks returns with an expert panel on wine marketing