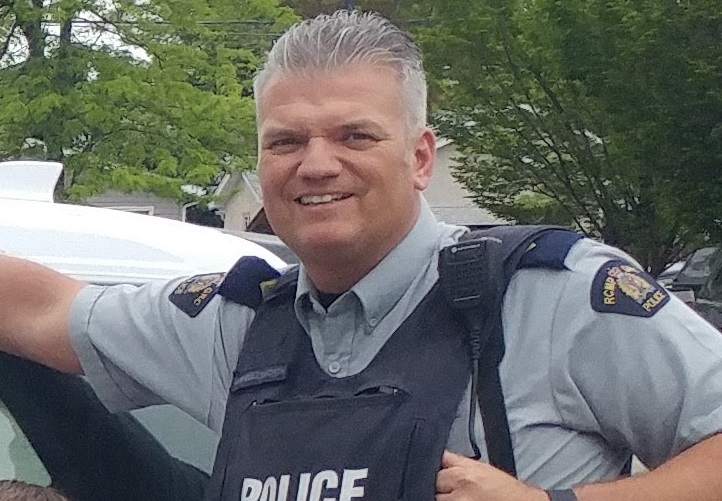 Sergeant Don Wrigglesworth will soon be the new commander of the Oliver RCMP. (Photo contributed)

The Oliver RCMP is getting a new commanding officer who is a familiar face to Penticton residents, now-Sgt. Don Wrigglesworth.

Wrigglesworth, who was often seen walking the downtown beat in Penticton, was announced as the new commanding officer for the Oliver detachment Thursday at the Regional District of Okanagan-Similkameen (RDOS) protective services committee meeting and brings 21 years of policing experience to the detachment.

“Don has been in the region for quite some time. In fact, quite a few years ago he was posted in Oliver,” said Supt. Brian Hunter, who made the announcement at Thursday’s quarterly crime stats report to the RDOS board.

“Definitely a very community-minded member. He will be in place in Oliver before Christmas,” Hunter said.

“(He) comes with a lot of experience in prolific offender management, crime reduction, street crime enforcement and we’re really excited to bring that expertise to Oliver.”

Wrigglesworth relieves Cpl. Brian Evans of his temporary duties running both the Keremeos and Oliver RCMP detachments during the interim period.

“Unbelievable job of running two detachments for the last several months and will continue to be there until Don arrives,” Hunter said.

Wrigglesworth told the Times-Chronicle that he was very excited to hear that he was the successful candidate in the Oliver posting.

“The opportunity arose and I felt that I was at a point in my career where I was ready to step up and fill the role.”

In fact, the Town of Oliver was his second posting with the RCMP from March 2003 to August 2008. He worked as a general duty constable and then in a plain clothes position focussing on drug enforcement.

“I really enjoyed the community while I was there participating in recreational adult hockey and various events. I hope to rekindle some of the bonds that I made while there with Chief Louie and the OIB, South Okanagan General Hospital and the Punjabi community.”

Wrigglesworth is looking forward to working with the schools and developing a relationship with the mayor, council and the business community.

“I won’t forget you press folk, either.”

The officer said his immediate focus will be getting to know the police officers and staff at the Oliver detachment. His goal is to work toward a healthy environment internally so that members can address the needs and safety of the community.

Wrigglesworth said he hopes to start his new position before Christmas. “The sooner the better.”

The pandemic, while anecdotally leading to reductions in overall crime, is also leading to fewer people being remanded in custody unless they are accused of a serious crime.

“It’s very difficult to have people remanded. A good example of that is not that long ago we arrested a client with a stolen vehicle, in the stolen vehicle, with stolen property, drugs, firearms, a prolific offender with a significant criminal record. They were arrested and released on conditions the next day,” Hunter said. “So that’s just part of the recidivism we have to deal with. It can get a little bit frustrating but the (RCMP) members continue to do what they have to do.”

In response, rural RCMP in the South Okanagan have taken on “projects,” Hunter said, including surveilling prolific offenders.

“Getting some great results out of that in regards to arrests and charges. It’s just not necessarily everyone gets remanded in custody. Those are just some of the issues we’re dealing with,” Hunter said.

The Osoyoos RCMP detachment reported a 31 per cent increase in calls for service during the third quarter compared to the same period last year.

“That’s the largest increase out of any detachment in our region. And that’s that that goes part and parcel with what Osoyoos can provide people, it’s a nice warm holiday holiday retreat that a lot of people are going to come to when they can’t go elsewhere,” said Sgt. Jason Bayda while presenting quarterly crime stats to Osoyoos town council Nov. 16.

“We had close to 300 more calls for service this year than we had the previous year, which is significant.”

“The majority of those were neighbour disputes and where people say off the cuff remarks to someone else, that person phones us and it’ it ends up being a non-issue, it’s not a threat where someone was going to be following up with it, but it still creates a police file,” said Bayda.

The number of sex offences reported doubled from four to eight, with two these incidents being historical.

“I think it’s important to note that there’s a lot of different types of sex offences, it’s covered under the sex offence umbrella. There’s when we look at these things that, a lot of people think, Stranger sex offences, someone’s walking down the street, they’re grabbed, taken into the bushes and offended, we don’t have any of that,” Bayda said.

“But sex offences are something that has the ability to really affect someone long term for the rest of their life.”

In contrast to violent crime, property crime was down five per cent overall in Osoyoos during the third quarter of 2020.

“This can be attributed to our priorities this year, which one of them is to reduce property crime. I’m surprised with the number of people that we’ve had in town this summer,  with the number of files, I actually expected to see an increase,” Bayda said.

“I think what’s important for the public to realize with these stats is the number of thefts from vehicles we have are typically from vehicles that are unlocked. We say it time and time again you have to lock your vehicles up and hide your valuables,” Bayda said.

-With files from Bill Atwood 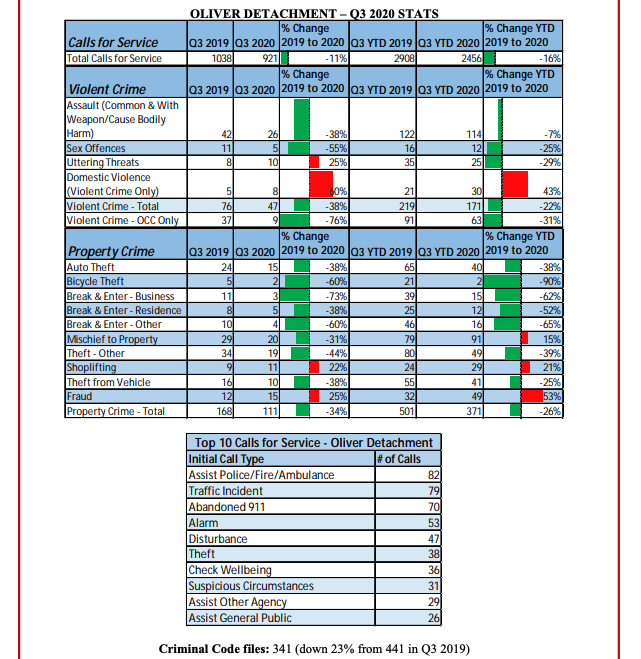 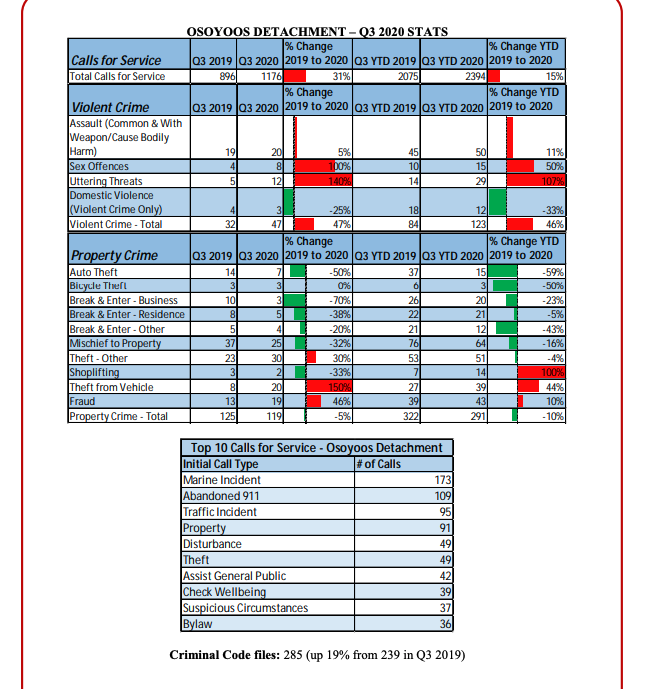 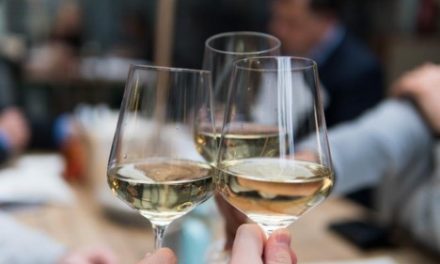 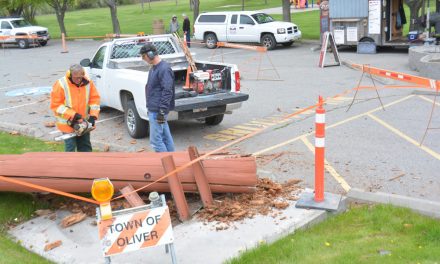 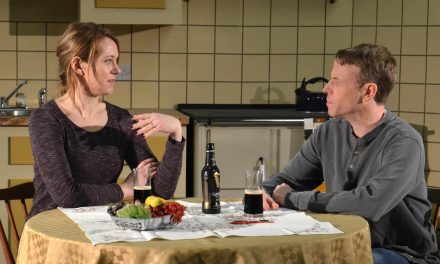 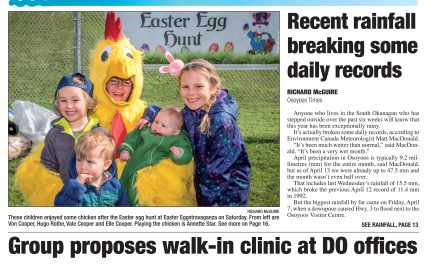