Don’t foul our beaches and parks with booze

Booze on the beach?

I know it happens anyway, but for the City of Penticton to consider condoning open alcohol consumption where families swim and play is irresponsible, to say the least.

What is even more flabbergasting is the fact the majority of survey respondents in Penticton support this behaviour, prompting City Hall to forge ahead with the pilot project.

Alcohol consumption in public has always been a no-no and for good reason. So why allow it now?

We are told that it’s good for business and tourism. Well, in that case, let’s break out the barrels and put them on the most popular beaches and parks where little kids like to play. What a novel idea. Why didn’t we think of that before?

Perhaps because alcohol impairs judgment and lowers inhibitions. Not to mention heightened aggression, judging by previous assaults that take up the court’s time and taxpayer’s money.

I may be overlooking the responsible drinkers who aren’t imbeciles after two beers, but the issue is gambling with public safety, and no city should have the right to do that.

I bet local RCMP and bylaw enforcement staff are just thrilled with this pilot project. Police resources are already stretched to the max without having to deal with more issues pertaining to alcohol consumption.

There is also the potential for more broken glass, more pull-tab garbage and more conflict (in a world that has enough of it).

And how many of these imbibers will drive home impaired? And who is going to enforce that?

Hats off to city councillor Judy Sentes for being the lone objector to this head shaker of the year. At least one person on council isn’t willing to risk the well-being of the community.

The point is if people want to drink they can do so at home or at their favourite restaurant. Leave the public beaches and parks to the people who want to feel safe and not have to worry about the chump who’s had too much.

These places are the last remaining paradises in the city; leave them alone. 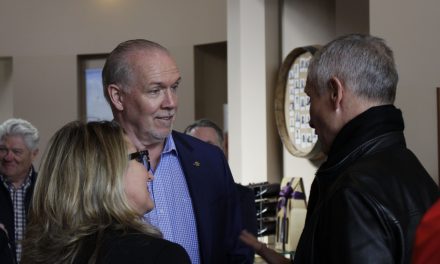 Uncertainty will continue for a while yet in B.C. politics

National park no longer a question of ‘yes’ or ‘no’